Miyako (宮子) is a resident of Hidamari Apartments Room 202 and is one of the original four main cast members.

Her hometown is in Fukuoka Prefecture. She has older brothers, one of whom is Masa.

Miyako is a stereotype blonde with equally yellow eyes, and is noticeably tall (second to Sae in height). She has boundless energy and is usually quick to do anything that catches her fancy. Miyako can excel in physical competitions (for example, swimming) and can excel in eating as much as she wants (which rivals the eating habits of Hiro).

Her hair is actually quite silky when properly treated. When not in uniform, she will usually wear hand-me-down male clothing.

Miyako has an exceptional gift for art that rivals the skill of anyone in the series. She was accepted to Yamabuki High School on recommendation and skipped the entrance exams. Given her poor background as well, she most likely is attending the school on a full scholarship due to her talent. She has also told her family that she is intending to go to an arts college on a scholarship, confident that she can get one.

Her art itself is frequently abstract, displaying her powerful imagination. She is quite fond of both "modern" art and more traditional forms, and has also displayed interest in Japanese poetry and folklore.

Miyako possesses a broad range of random talents, usually demonstrated for gags. For instance, in Chapter 119 of the manga, Miyako set up a pyramid of playing cards in pitch darkness within a seemingly short period of time.

She can sing well. Everyone on the cast agrees. She has said that as a child she sang in bars and nightclubs on occasion, a story her friends don't quite believe. She is especially skilled at enka.

Miyako has an active personality and can best be described at most times of the day as ditzy, yet easily a delight to be around. Her childlike-behavior often stirs up commotion whenever she goes, but it is never malicious in intent. Miyako is compassionate and will do whatever to ensure her friends (especially Yuno) will be comfortable and at ease.

Her ditzy demeanor is often the root cause for her spontaneous behavior, often surprising anyone whenever she makes a quick decision on important matters. It also makes her the deliverer of many fat jokes on Hiro, either due to childish innocence or gadfly motives.

She is a better student than she will admit to; when asked how she did on tests, she will almost always say something like "not so good" while never actually showing anyone her papers, nor asking for help on subjects that she's having trouble with (in contrast to Yuno, who has no trouble doing either).

Miyako was the first tenant who met and befriended the protagonist Yuno. Her exuberance is mostly the reason Yuno grew out of her initially shy deposition earlier in the story, and the pair are virtually inseparable.

Many things Miyako loves to do with Yuno include: playing with Yuno, playfully teasing Yuno, bathing with Yuno, hanging in Yuno's room, sleeping-over with Yuno, etc. (Miyako loves sleep-overs in general and will invite herself to them at the drop of a hat.) Miyako and Yuno have even shared a bed on occasion (and more frequently as time goes on).

There are enough interactions between the two, along with moments of flustering, that even signals possible subtext between the best friends. 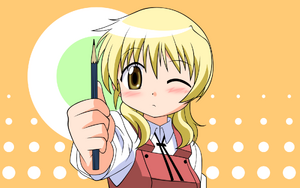 Retrieved from "https://hidamarisketch.fandom.com/wiki/Miyako?oldid=6417"
Community content is available under CC-BY-SA unless otherwise noted.