Nori (乃莉) is a resident of Hidamari Apartments Room 103 who was introduced in Hidamari Sketch x Hoshimittsu, along with Nazuna.

Nori has short, turquoise hair with twintails, with similarly colored eyes. When she prepares for bed, she has her twintails undone to show longer, shoulder-length hair.

A unique specialty Nori possesses is the knowledge of using a computer, which the rest of the girls lack. She enjoys drawing with computer software and has expressed an interest in graphic and game design. This is her defining skill, evident as her symbol is a computer mouse. She shows the other girls how to draw on the computer, search for information and make online orders, as well as use VoIP to speak with friends online.

Nori is also a skilled swimmer and claimed victory in the swim meet with the first years.

She is straightforward, speaking plainly, sometimes coming across as blunt, and can be sarcastic. She speaks without restraint, often prompting others to ask of her to stop whenever things begin to escalate. Hurtful comments can even surface from Nori.

Aside from her unsupervised conversing, Nori is generally free of any social quirks that the rest of the cast has. She usually points out the traits of the other girls, especially Nazuna's timid nature.

Nori is often seen with Nazuna in most scenes in the anime. Whenever this is the case, Nazuna always showcases her fragile demeanor whilst Nori has to show Nazuna the strength to deal with her problems; often, this includes holding her hand or sleeping together in Nazuna's bed.

Nori is usually the motivator for Nazuna, quickly propping her up whenever Nazuna fails to show self-esteem or shies away from a subject or task. 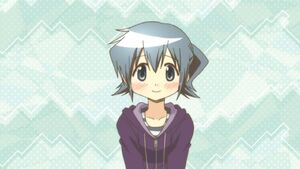 Retrieved from "https://hidamarisketch.fandom.com/wiki/Nori?oldid=5825"
Community content is available under CC-BY-SA unless otherwise noted.