The Principal of Yamabuki High School is a short, balding man who looks over the school and is usually seen scolding Yoshinoya for her outrageous antics. He is depicted as an elderly man, but is unusually fit for his stature. He is only called by "The Principal".

He is easily distinguished from the rest of the characters with an nontraditional anime face. His eyes are never shown and his hair (and bushy eyebrows) are white. Most of his height is made by his own oval head. In most instances of the anime and in some depictions in the manga, he is seen shivering for reasons unknown. The Principal is deceivingly fit, however.

Not only is the Principal the authority figure of the whole school, he is unusually athletic. He is known to be extraordinarily gifted when it comes to swimming and is able to endure exercise much longer (and with less complaining) than Yoshinoya.

He is also able to sing with much enthusiasm and power, enough to outshine even Yoshinoya.

The Principal is very formal in speech, even when scolding or enjoying leisure time. Yamabuki students are often greeted as if they were children of the Principal, and other adults (such as the Landlady) are greeted and thanked for what they have done for the Principal or the school (even if so indirectly to the Principal's benefit). His dedication to his work is such that he is almost always the last staff to leave at night.

He is a fair administrator, scolding Yoshinoya whenever she poses as a threat to the children's purity and also keeping her on the staff due to her dedication to the profession of teaching. The Principal is undoubtedly wise and offers or says valuable information in life, such as the need for a balanced and fulfilling meal or the need to maintain physical health.

The Principal will often address the student body as a whole, or individual classes, on a variety of topics. Occasionally these talks include references to Yoshinoya's misdeeds, to the bewilderment of his audience. He particularly enjoys events like the annual athletic festivals and the school swim meets, which he will use as an opportunity to advocate for physical fitness. His speeches are often long, sometimes excessively so, and have been occasionally known to lull unwary students to sleep.

Nothing is known about his personal or family life (or whether he even has a family). 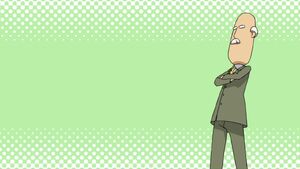 Retrieved from "https://hidamarisketch.fandom.com/wiki/The_Principal?oldid=6423"
Community content is available under CC-BY-SA unless otherwise noted.