Ms. Yoshinoya is Yuno's and Miyako's homeroom teacher and art instructor at the Yamabuki High School. She teaches art classes for the other students in the art department, including Hiro and Sae. Her eccentricity comes as a surprise to new students, including Nori.

Yoshinoya sports a Hime ("princess") hairstyle with her forest green hair with complementing green eyes. She is the most noticeably endowed character in the Hidamari Sketch universe. Inside school, she wears pink indoor slippers that make a distinct squeaking sound with every step.

Yoshinoya's most well-known "talent" is cosplaying (albeit she prefers not to call it cosplay), wearing many different costumes depending on the situation, season, or event. Every costume presented is made by Yoshinoya herself, which showcases her unnatural ability to tailor such complex designs. She has occasionally offered to repair student uniforms as they wear out (a gesture sometimes misinterpreted by other students) and at one point was asked to make a friend's wedding gown and bridesmaid's outfits.

She has an immense love of teaching and cares deeply about her students. She can become surprisingly serious when counseling her students about their futures, and does her best to give advice that will help set them on the right path. She has expressed fears that she can be too harsh in doing so, but in reality she is often quite perceptive.

Other than her craze of dressing up, Yoshinoya is also known to be artistically gifted herself. A statue she put up on campus has become something of a legend at the school. Even the Principal will admit to her talents, both at art and teaching.

Yoshinoya is brimming with energy, but often gets into more trouble than is necessary for a teacher. She is shameless in publicly waring the most bawdy of outfits in front of her students.. She also tends to make semi-ribald jokes in class (and to students' parents). She does not seem to realize that this makes her students uncomfortable. In spite of this, her students appear to love her.

She can be extremely egotistical, presenting herself as a "princess" and praising her own skill and beauty to anyone who will listen (or who has no choice, like her classes).

She fears the Principal, mostly due to him having to scold her in behavior unbecoming of a professional, and will go to great lengths to avoid his scolding (with the exception of correcting her behavior). She often kicks fellow art teacher Mashiko out of the art prep room when working on her costumes. However, she can still show compassion to anyone and can be quite perceptive at times..

She appears to be good friends with school nurse Kuwahara and seeks refuge in the infirmary when feeling tired or hiding from the Principal. She has done artistic collaborations with fellow art teacher Ikezawa, although they tend to disagree on the themes to incorporate in each piece.

Please keep the gallery clean of anything too "dirty". 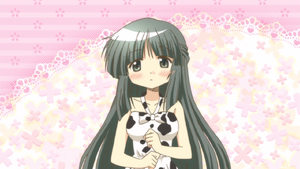 Retrieved from "https://hidamarisketch.fandom.com/wiki/Yoshinoya?oldid=6378"
Community content is available under CC-BY-SA unless otherwise noted.